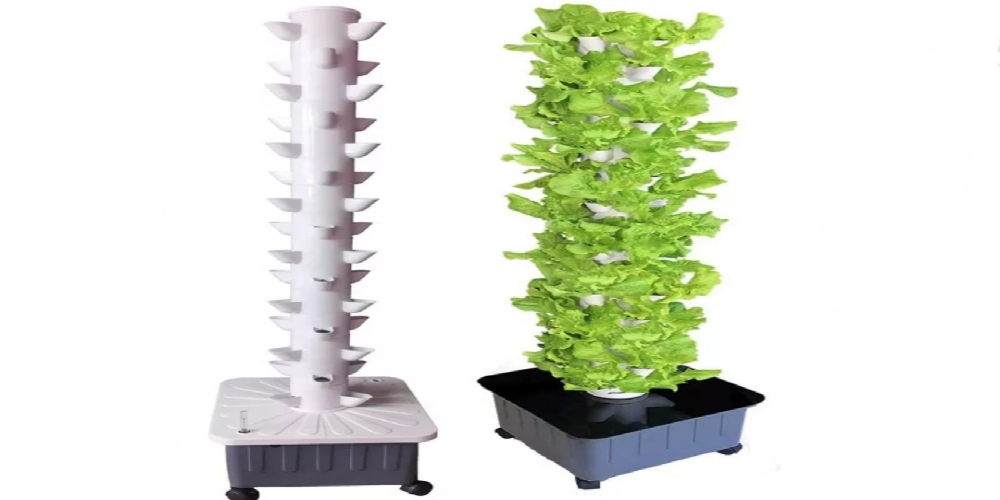 Agriculture is the world’s oldest profession, and why not? To survive, humans have to eat food. Agriculture has gone through a series of technological advancements from what it once was to what it is today. One such advancement is the aeroponic tower garden.

A major way humans farmed crops was to plant them on fertile farmlands. In other words, to feed a large population, more expanse of land would have to be farmed on. Although the world is not in any immediate shortage of land, there has been an increasing need to bring the farms closer to markets.

So, what is an Aeroponic tower garden?

Rather than find a large expanse of land to grow crops horizontally, an aeroponic tower garden grows crops vertically. What’s more? It has proven to have numerous benefits for both small-scale and large-scale farmers. Aeroponics is a type of hydroponic system where plants are suspended in the air and fed with nutrient-rich water. So, instead of getting their nutrients from soil, plants derive them from water with nutrients.

Most of the fuss surrounding this system of planting is as a result of the benefits attached to them. For many optimists, systems like this are the future of agriculture.

All year supply of veggies

If you’re a lover of veggies, this must be music to your ears. An aeroponic tower garden is able to produce all year round because the system can be kept indoors and under controlled weather conditions. Plants that would naturally die off or not survive winter months can be grown indoors where they can get necessary heat.

Qualitative research has shown that when plants are grown in an aeroponic tower garden, they tend to grow much faster than they would in natural soil medium. Again, it is one of the reasons the system has been accepted by the agricultural community. Growing crops faster means the farmer can have more production cycles in a year. It also means there would be more of such crops available in the market.

Naturally, plants have played their parts in delivering sufficient amounts of oxygen to our world. Aeroponic tower garden system on the other hand, takes this a little further by actually only using up to 90% less water. This makes them viable often in dry areas of the earth. The system recirculates its nutrient-rich water as a way of feeding the plants. As such, there’s no need for regular water change.

Since aeroponic tower gardens are vertical structures, it means you can have more growing plants for every cubic square meters. You can grow your favorite crop right in the comfort of your home. This provides you with fresh, evergreen plants whenever you want. It’s like having your greenhouse right next to you without having to worry about the infrastructure.

As the human population continues to grow, there will always be a need to find supplementary ways to meet its food demands. By using aeroponic tower gardens, more veggies can be grown in a small amount of space. This not only offers convenience, it comes with its extra load of benefits.

Faye is an amazing person and a general blogger, and she wants to help others who might be going through tough times. She's always willing to listen, and she'll do whatever she can to help make things better for you.

Rams Jersey: Buying the Authenticated One

Rams Jersey: Buying the Authenticated One

Tips to How to Install a Retractable Garden...

Some Things You Need To Know

15 Powerful Beliefs That Will Free You From...

3 Ways To Make Your Life Simple And...

7 Positive Things You Should Say Today